Cheshire kinesiology students are embracing learning using the ICPKP materials on iPad, and having Apple TV in the classroom. Using the iPad means that students are able to engage actively with the most up to date of the charts developed by Dr Dewe as they work through the balancing exercises in class, and they can use the various anatomy and posture measuring apps for class discussion and interactions.

All the students are working towards owning their own iPad or iPad Mini, and all of us feel we are in the 21st Century!. Thank you to Dr and Mrs Dewe and the ICPKP computer teams for the hours of hard work that have gone into making this possible for us.

Here’s a link to the Kinesiology iPad App.

Alison Finlay has achieved greatness and obtained her International Post Graduate Diploma of Kinesiopractic® – This makes Alison the third Kinesiopractor® in UK, with three more coming to the finish line shortly. A hearty Well Done ! to Alison. Alison has a special role to play in the ICPKP community, so watch this space for more details…

Cheshire K students decided to “boldly go” to the frontiers of ICPKP techie based learning and plunge themselves into learning using iPad technology. It all sounds very scary, but actually it will be pretty simple from their point of view, with Apple TV in the teaching room, online tests now being done through the iPad instead of a keyboard/computer. For the future, it will mean that they can access all their learning materials on iPad, including all the ICPKP charts, and the interactive database of finger modes so it is pretty exciting. No more dragging around those heavy book bags when you come to class! At last.

The whole database will be on iPad and iPhone by Christmas and all students can transfer to the iPad system to get their materials online. (there is a fee for all this, but it’s pretty good).

Here’s a link to the Kinesiology iPad App.

Dr and Mrs Bruce Dewe came to Macclesfield at the end of May 2013 using Apple TV to teach an enthusiastic bunch of ICPKP Paddlers how to use the new ICPKP iPad Kinesiology app.

This new venture into the world of teaching kinesiology 21st century style, had the group buzzing with excitement. The next day, Mrs Dewe taught the Pelvic Diaphragm muscles to the group, and most followed the class on their iPads as well as with the old fashioned paper copies. The group are ready to help all sorts of people with urinary, erectile and bowel control problems, so contact your nearest ICPKP practitioner if you’d like to know more.

The weekend was rounded off with an afternoon of Lego Serious Play, with lots of laughter, creativity and pinching of other peoples’ bricks. 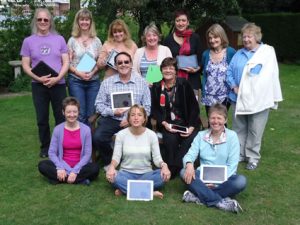 Denise Gurney is speaking at the NEC in Birmingham to the Federation of Holistic Therapists. Her topic is Mastering Kinesiology, and Denise is focussing on teaching some of the delegates a technique that they can take with them into their clinical practice, as well as giving them an overview of the sometimes confusing UK kinesiology scene.

Dr Bruce Dewe is travelling to the UK to present the new iPad teaching model to the UK students and faculty. This is a very exciting breakthrough in ICPKP teaching, and the students will be delighted with the new App – all new students will find their class notes on their iPad, they can make notes on each unit, save pages to a special “my special pages” folder. They can even video bits of class for themselves.

Their online exams are Cloud based and once they pass the online test their Certificate for each unit, it appears on their iPad in full colour. In the next version (due out soon – Apple permitting) they will be able to put their Cert on Facebook.

Bruce is working on a plan for “Oldies” to able to access the units they have taken and get up-to-date versions of them on iPad. Students will be able to print their own Student Assessment Journals.

Dr Bruce Dewe is back for a second visit to Cheshire Kinesiology in Macclesfield, Dr Dewe is giving the UK students a real treat by teaching this workshop personally. It is a MUST have for any kinesiologist, to ensure safe clinical practice and genuine referrals when medical diagnosis is required. It’s the workshop that keeps us all safe as practitioners. Repeaters are welcome – you can’t take this workshop too many times!

If you would like to attend, fill out the application form and return it to Denise Gurney ASAP.

What is: allergy food testing?

People are now much more aware of diet and how different foods affect us. In the past, our diet would have been quite simple – we would have eaten local, seasonal, fresh food. The picture nowadays is very different and means that many people need allergy food testing. END_OF_DOCUMENT_TOKEN_TO_BE_REPLACED

ICPKP UK provides an internationally recognised training course leading to competency based qualifications at Certificate, Diploma and Advanced Diploma levels. It is a complete course, containing all the units required for a 21st century practitioner who needs skills in practice management, health and safety issues, cultural sensitivity and developing professional relationships, alongside the obviously essential skills of being a kinesiopractor® in training. END_OF_DOCUMENT_TOKEN_TO_BE_REPLACED